The Minipack CTD is a titanium/acetyl conductivity-temperature-depth system that can be used for discrete profiles, installed on a data buoy or on a towed undulator. The instrument includes conductivity, temperature, depth and fluorometer sensors, incorporating a high-performance 24-channel data logging and transmission system which allows for the acquisition of up to 16 external channels (e.g., dissolved oxygen, pH, PAR, fluorescence, turbidity, transmissance etc.).

*the wavelengths for the turbidity filters are a customer option but must be in the range 400 to 700 nm. The same wavelength is used in both the excitation path and the emission path.

A location system of unspecified make or model that determines location on the Earth's surface using the Global Positioning Satellite Network. Angular co-ordinates are given relative to WGS84 CRS. Other parameters such as platform velocity may be derived from this.

The Penguin SeaSoar was successfully deployed three times from RRS James Clark Ross cruise JR98 (25 July to 14 August 2003) in the Celtic Sea. There had been considerable problems with the SeaSoar winches early on in the cruise as well as a faulty hard drive but these were resolved which allowed the SeaSoar to be deployed. Run 1 was designed to measure conditions travelling from almost completely mixed water in the Irish Sea, across the Celtic Sea front, and through to the CS3 mooring site. Run 2 transected from mooring site U2 (a well stratified site North West of France) and mooring site N1 (close to the shelf edge). Run 3 ran from the mooring site N9 (the site furthest seaward of the shelf edge) through the CS2 (shelf edge) and CS1 mooring sites and on to station CS3.

Please note that the positions, start and end times are those for which data is available. The SeaSoar may have been in the water for a longer period than those reported here. 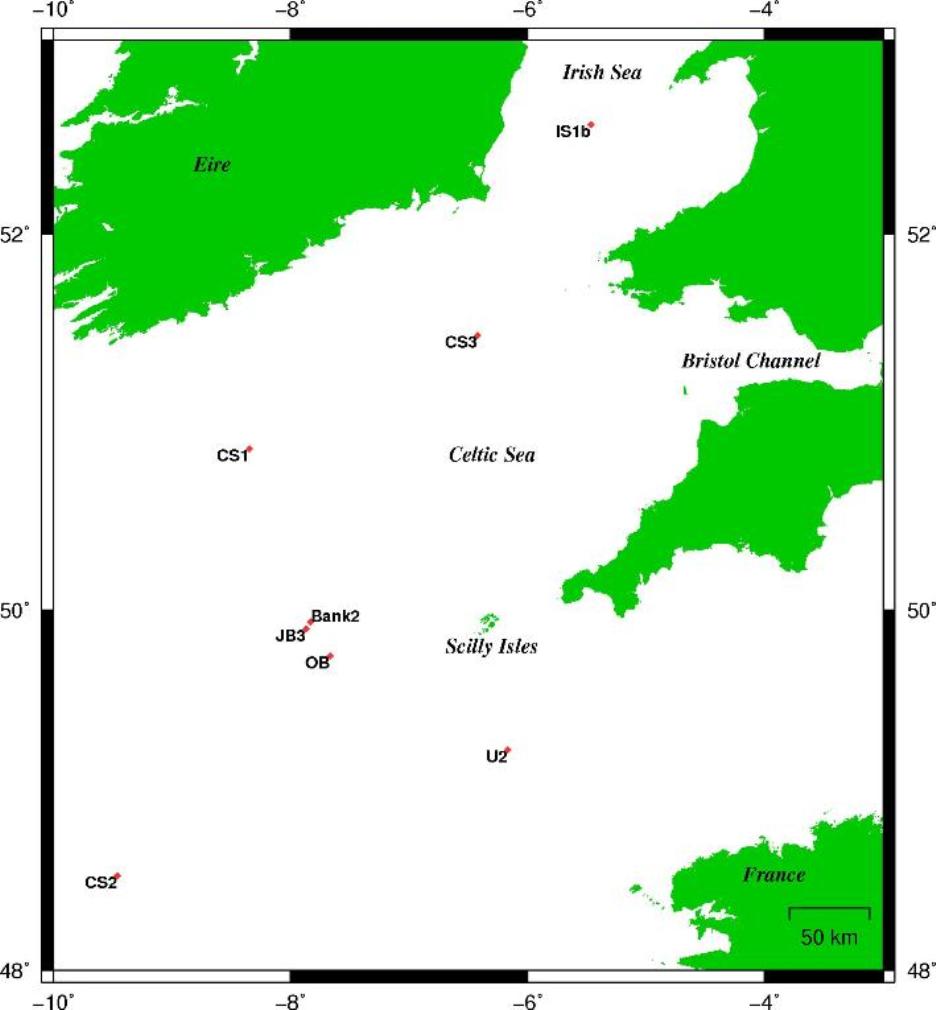 The time stamp in the raw Minipack files has two origins: hours, minutes, and seconds are from the Minipack internal clock, while the decimal days are from the DAS system associated with Penguin. After some work it was found that the DAS time was correct (UTC) for the SeaSoar run 2 (06 - 07 August 2003) and run 3 (08 - 10 August 2003), but was UTC - 1 hour for run 1 (04 - 05 August 2003). The Minipack time was consistently 11 minutes 49 seconds behind UTC. The time stamp in the processed files used the Minipack time, with 11 minutes 49 seconds added to it, and so is consistently UTC.

Calibration and processing of the SeaSoar data (salinity, temperature, depth, chlorophyll fluorescence) has been carried out by the originator. Calibration was done by comparing the vertical profile made by SeaSoar at 19:30 UTC on 10 August 2003 with data from adjacent CTD casts (cast 150 at 19:00 UTC and cast 151 at 20:00 UTC from this cruise).

Comparisons of salinity were made away from strong vertical gradients (i.e. data within the pycnocline were not used) because of the difficulty associated with pycnocline movements between the CTD and SeaSoar vertical casts. Using only data within the bottom layer a calibration equation was generated as:

The resulting error about this calibration was less than the 0.01 resolution of the Minipack salinity measurements, so the error should be taken to be ±0.01.

Comparisons of temperatures, as with salinities, was made using the bottom layer (non-pycnocline) data only. A calibration equation was generated as:

The error about this calibration is ±0.03 °C

Due to the difficulties with the winch sliprings there is very little SeaSoar data available prior to a deployment to assess any pressure offsets. The data on 10 August 2013 showed the Minipack pressure sensor to be reading 0.19 m too high. All Minipack data have subsequently been calibrated by subtracting this 0.19 m, and then applying a further offset based on the difference between the CTD pressure offsets on 10 August 2013 and on the days of the SeaSoar runs. This further offset was calculated as the average between the CTD casts immediately before and after the SeaSoar run.

An estimate of the pressure error post-calibration can be made by assessing the range of two CTD pressure offsets used to calculate the average SeaSoar offset. The worst error is for run 2 (approximately 0.7 m).

These SeaSoar pressure offsets were subtracted from the raw SeaSoar Minipack pressures. The calibrated pressures were then multiplied by -1 to make depth below the sea surface negative.

Comparisons between SeaSoar and CTD chlorophyll measurements used data from the entire water column, as extending the range of available chlorophyll concentrations to include the subsurface chlorophyll maximum was needed to achieve a reliable calibration. A calibration equation was generated as:

Data were received by BODC in three .dat files. The series were reformatted to the internal data format using established procedures. In some instances there were two consecutive rows with the exact same timestamp. In this situation the time stamp for the two rows (with the same timestamp) were recalculated and placed equidistant from the row immediately before them and immediately after them. The following table details mapping of variables to BODC parameter codes.

The reformatted data were visualised using BODC in-house software. Suspect data were marked by adding an appropriate quality control flag, and missing data marked by both setting the data to an appropriate absent data value and setting the quality control flag. It was noted during this process that there are gaps in the data where logging was disrupted (probably due to the problems reported by the originator) but this does not seem to have affected the quality of the data recorded.

Physical-Biological Control of New Production within the Seasonal Thermocline

This project was a NERC responsive-mode project which was co-funded by the Defence Science and Technology Laboratory and ran from 2003 to 2006. The key institutes and scientists involved were:

The main aim of this research was to investigate the generation and dissipation of turbulence in the thermocline, and to quantify how the resulting mixing (supplying nutrients and controlling the light experienced by the algae) affected the growth of phytoplankton within the sub-surface chlorophyll maximum (SCM).

The objective of the research was to test the general hypothesis that, in seasonally-stratified shelf waters, temporal and spatial variability of the rate of 'new' production is determined by the degree of coupling between physical and biological processes within the seasonal thermocline. In particular it has been suggested that physiological adaptation by phytoplankton making up the subsurface chlorophyll maximum drives a biological pump for extracting nitrate from the bottom mixed layer that is sensitive to internal mixing and to external climatological factors.

The sampling and experimental strategy was based on established methods for obtaining compatible, high-resolution vertical profiles (alternate CTD and FLY) and sections (SeaSoar) of physical, chemical, and biological parameters, allowing quantification of vertical fluxes and primary production on tidal and internal wave time scales. The cruise schedule (with associated mooring deployments) for the project is below.

The main products of the research were: