Data quality issues were observed by the originator, which have been outlined below for future user awareness.

The temperature data collected here are much poorer than those from the MicroCATs.

The following sensors were judged to have poor data and recorded as such in the JC090 log:

The originator has placed thermistor T4218 within the NW-Inner mooring but was unable to cross-reference its location using either the deployment or recovery cruise reports. It should be noted that the temperature appears to be affected significantly by surface warming (very warm in September 2012 and September 2013) so it is likely near the top. The originator has placed suspect quality flags on the pressure channel for this reason which are flagged 'L' in the file.

During BODC quality control procedures, BODC have applied additional 'M' flags where the data values for temperature were significantly noisy at the beginning and end of the data collection period.

It should be noted that BODC has taken a high level approach and therefore further quality control has been left to the discretion of the end user.

The SBE 37-SM MicroCAT is a high accuracy conductivity and temperature recorder (pressure optional). Designed for moorings and other long-duration, fixed-site deployments, MicroCATs have non-corroding titanium housings rated for operation to 7000 metres or pressure sensor full scale-range. Communication with the MicroCAT is over an internal, 3-wire, RS-232C link. The MicroCAT's aged and pressure-protected thermistor has a long history of exceptional accuracy and stability (typical drift is less than 0.002° per year). Electrical isolation of the conductivity electronics eliminates any possibility of ground-loop noise.

Further information can be found via the following link: SBE 37-SM MicroCAT Datasheet

The Star-Oddi Starmon mini is a compact microprocessor-controlled temperature recorder with electronics and probe housed in a strong waterproof cylinder made of either plastic or titanium.

The moorings were deployed on the RRS Discovery Cruise D381A in 2012 and were recovered a year later on the RRS James Cook Cruise JC090.

Temperature measurements were collected as part of the OSMOSIS experiment in the eastern North Atlantic. These data were obtained on a suite of five (5) moorings during September 2012-September 2013 and, therefore, contain mooring motion. They have been modified from their original measurements in order to correct for temperature biases. Wild-point editing were also applied to the noisy data. The originator has noted that pressure was not recorded on these data but was inferred from "known" positions on the mooring with respect to CTD locations (see Allen et al. 2013 D381 cruise report). Thus, these depths may be incorrect. Also, that for an unknown reasons, there does not seem to be a CTD cast coincident with MicroCAT measurements during the recovery period. Thus, no calibration curve exists. The original data can be obtained upon request.

Data have been cropped to the times during which the moorings were placed in the water (September 2012) and recovered (September 2013). This was ascertained from the pressure sensor on each instrument.

The originator has applied the following processing steps to each Star-Oddi Starmon file.

Read from .DAT file
Read into matlab and placed into large structure
Sorted depths
Looped over plots to assess data quality; made notes as appropriate (described below)

The originator took the additional following steps due to noise within these data to ensure data were of fair quality:

1. Determine the "quality" of each sensor's data (quality_check1.m)
* loop over each thermistor record and plot each data record visually
* manually assign a quality flag to the data (1 good, 2 potentially bad or 3 bad)
* in this pass, a quality flag (i.e., quality_flag) of 3 was given to data having spikes (or wild points)

2. Eliminate spikes or wild points within those records whose quality_flag = 3 (wild_point_editor.m)
* wild points are defined as those data points whose value exceeds a difference from the local mean of 7.1 times the local standard deviation.
* the kernel used to define the local mean and local standard dev is a 1-day (721-pixel) window centred on each data point
* wild points are replaced with the median value of data within the same window
* we retain the original data in the field "temperature"
* the (filtered) record is placed within a variable called "temperature_modified";
* the quality_flag is set to 2

Some records which pass this automated step are of poor quality. This is because the local standard deviation is large due to the outliers themselves. A subsequent step ensures data within the "temperature_modified" field is of superb quality.

3. Determine the "quality" of each sensor's data (quality_check2.m)
In this step, we correct those records which were not corrected in the preceding step.
* loop over each thermistor record and plot data visually
* we examine the "temperature_modified" field rather than the "temperature" field
* we correct those records whose quality_flag = 2 in the following manner: 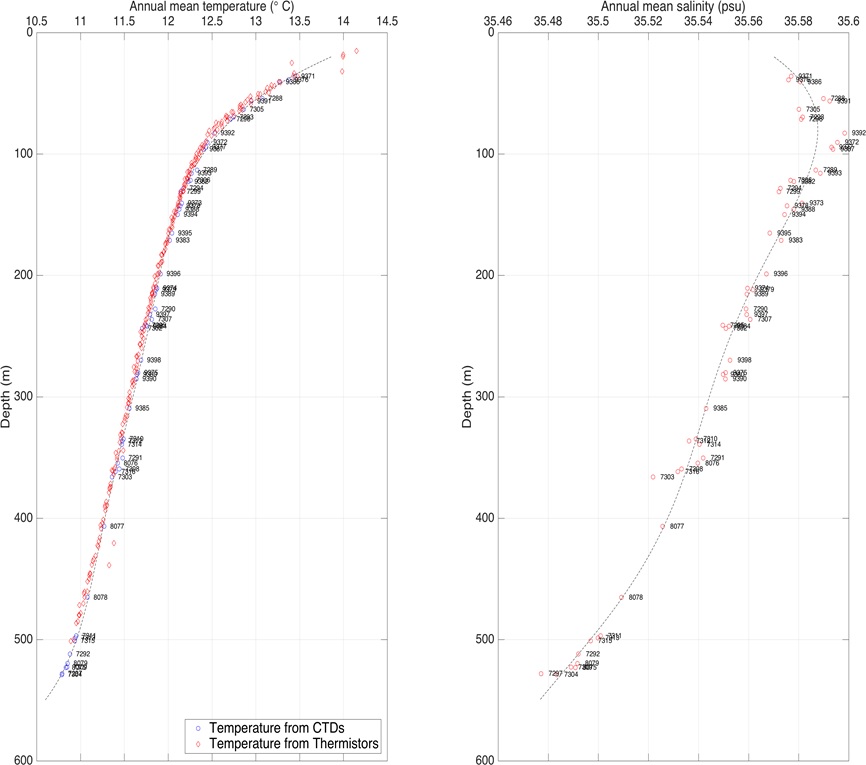 While temperature shows a very nice (canonical) shape with depth, salinity shows some scatter relative to a fifth-order polynomial fit. Thermistor temperature is slightly colder than CTD temperatures for the same depth. This suggests incorrect but consistent spacing between thermistors and MicroCAT CTDs.

Data from 243 Star-Oddi thermistors were submitted to BODC as Matlab files, one file for each sensor. The table below describes the originators variables and how they were mapped to appropriate BODC parameter codes for standardisation purposes.

The data were visualised in internal built software EDSERPLO. Suspect data were flagged according. Missing data values were set to appropriate values and flagged. All data files were modified by the originator, to remove data points collected during the deployment and recovery of instrumentation.

The OSMOSIS consortium aims to improve understanding of the OSBL, the interface between the atmosphere and the deeper ocean. This layer of the water column is thought to play a pivotal role in global climate and the productivity of our oceans.

OSMOSIS involves collaborations between scientists at various universities (Reading, Oxford, Bangor, Southampton and East Anglia) together with researchers at the National Oceanography Centre (NOC), Scottish Association for Marine Science (SAMS) and Plymouth Marine Laboratory (PML). In addition, there are a number of project partners linked to the consortium.

Three cruises are directly associated with the OSMOSIS consortium. Preliminary exploratory work in the Clyde Sea (September 2011) to hone techniques and strategies, followed by a mooring deployment and recovery cruise in the vicinity of the Porcupine Abyssal Plain (PAP) observatory (in late Summer 2012 and 2013 respectively). Additional opportunist ship time being factored in to support the ambitious glider operations associated with OSMOSIS.

Types of instrumentation and measurements associated with the OSMOSIS observational campaign:

The target for the inner south-east mooring was 48° 40.740' N, 16° 10.440' W in approximately 4,830 m of water. The mooring consisted of 50 Star-Oddi thermistors, one upward pointing 75 kHz ADCP, seven Nortek single-point current meters and seven SBE 37 MicroCAT sensors. In addition, a light and Argo tag were fixed at the top of the mooring.

Instruments deployed on the mooring