The mooring was located in the River Forth in the maximum turbidity zone where there is a clear tidal influence on the channels, particularly ODSDM021 and TURBXXXX. During screening any obvious spikes were looked at in closer detail but were generally left unflagged due to the extensive quality control and expertise at SEPA. Periods of particularly high values in CPHLZZXX and TURBXXXX were also discussed with SEPA but due to the buoy being in the maximum turbidity zone and that the post mooring checks found no faults, it was agreed to leave these data unflagged.

Low dissolved oxygen levels were observed throughout the data, particularly during the summer months. On their website, SPEA indicate this is due to oxygen being less soluble when the water temperatures increase during summer and so as these low levels are expected, data were not considered to require flagging.

The depth of the sensors at the time of measurement at each site is available upon request for the 2016 data onwards. 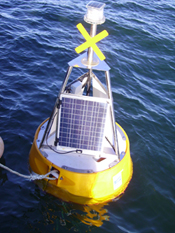 The standard unit conversion factor of * 31.252 was applied to oxygen concentration during transfer to obtain the BODC units of µmol/l. (Bittig et al., 2018)