The OEM CT sensor is designed to provide high accuracy conductivity and temperature measurements in a package that can be readily integrated into user systems. The CT sensor relies on an inductively coupled conductivity sensor, with a large inside diameter that eliminates the need for pumps. A high grade Platinum Resistance Thermometer is used to measure temperature.

Sensor specifications are given in the table below. Since 2009 this instrument has been manufactured by Teledyne RD Instruments as a Citadel CT-EK Sensor. More information about the instrument can be found on the Teledyne Citadel specification sheet.

The Aanderaa Oxygen Optode is based on the ability of selected substances to act as dynamic fluorescence quenchers. The fluorescent indicator is a special platinum porphyrin complex embedded in a gas permeable foil that is exposed to the surrounding water.

A black optical isolation coating protects the complex from sunlight and fluorescent particles in the water. This sensing foil is attached to a window providing optical access for the measuring system from inside a watertight titanium housing.

The foil is excited by modulated blue light, and the phase of a returned red light is measured. By linearizing and temperature compensating, with an incorporated temperature sensor, the absolute O2 concentration can be determined. According to the manufacturer, the lifetime-based luminescence quenching principle offers the following advantages over electro-chemical sensors:

Instruments and methods for all North Dogger SmartBuoy deployments are described by Greenwood et al. (2010). The thermocline-depth rig on the SmartBuoy mooring was equipped with the following instruments:

In situ sensors were mounted at 31 m depth on the mooring. A solid state data logger (ESM-2) designed and built by Centre for Environment, Fisheries and Aquaculture Science (Cefas, UK) was used for data acquisition and sensor control. Measurements were recorded at a frequency of 1 Hz for turbidity, chlorophyll fluorescence and temperature and conductivity from FSI sensors and at 5 Hz for Aanderaa optode and Aanderaa conductivity sensors, with a burst frequency of 2 per hour and a burst duration of between 5 and 10 min depending on the length of mooring deployment.

The in situ salinity and oxygen data were bench calibrated.

Discrete samples for calibration were collected by CTD rosette sampler, during visits to the mooring. Data from CTD samples have not been merged into the mooring data set.

The processed and quality-controlled data were supplied to BODC in a bulk, ASCII format file. Accompanying files provided instrument metadata. The data were converted into BODC's standard format, with one file for each rig deployment. The data were visually screened, taking into account comparisons between related parameters, and the environmental context. No major data issues were identified, but there may be some gaps in the data series, due to instrument failures. 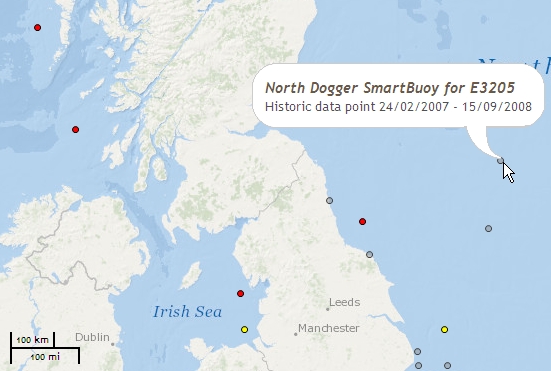 Normally two sensor suites were deployed on the mooring during each deployment: one near-surface (about 1 m); and one at thermocline depth (25 m or 31 m).

The near-surface frame was typically equipped as follows:

The mid-tether frame was typically equipped as follows:

The SmartBuoy mooring was first deployed on Cefas Endeavour cruise 3/07. Data were relayed to shore every two hours. The mooring was deployed for several months at a time, after which it was serviced, sensors replaced or repositioned, samples recovered, and then it would be re-deployed. In total, there were seven individual deployments at the North Dogger site:

SmartBuoy deployments at the North Dogger site were funded by Marine Ecosystem Connections: essential indicators of healthy, productive and biologically diverse seas, a project funded by the UK Government's Department for Environment, Food and Rural Affairs (Defra project code ME3205).