The beam attenuation channel has been identified by the Originator as suspect data and therefore BODC has removed this channel.

A calibration generated by the Originator has been applied to the chlorophyll data which has lead, on occasion to negative values within the profiles. All the negative values have been flagged by BODC and should be considered as suspect and be used with caution.

CTD casts were carried out on cruise FRV Scotia 0512S using the Sea-Bird SBE911plus. The instrumentation is detailed below.

No changes to the CTD instrumentation were recorded during these cruises.

The ECO-FL can operate continuously or periodically and has two different types of connectors to output the data (analogue and RS-232 serial output). The potted optics block results in long term stability of the instrument and the optional anti-biofouling technology delivers truly long term field measurements.

In addition to the standard model, five variants are available, and the differences between these and the basic ECO-FL are listed below:

Documents are written by BODC highlighting irregularities that cannot be resolved.

Data cycles are inspected using depth series plots of all parameters. These presentations undergo screening to detect infeasible values within the data cycles themselves and inconsistencies when comparing adjacent data sets displaced with respect to depth, position or time.

Values suspected of being of non-oceanographic origin may be tagged with the BODC flag denoting suspect value.

The following types of irregularity, each relying on visual detection in the time series plot, are amongst those that may be flagged as suspect:

If a large percentage of the data is affected by irregularities, deemed abnormal, then instead of flagging the individual suspect values, a caution may be documented.

The following types of inconsistency are detected automatically by software:

This screening of the parameter values seeks to confirm the qualifying information and the source laboratory's comments on the series. In screening and collating information, every care is taken to ensure that errors of BODC's making are not introduced.

A total of 97 CTD casts were performed by Marine Scotland as part of on going research funded by the Scottish Government, during cruise FRV Scotia 0512S. CTD casts were deployed between 7-20 May 2012, starting east of Stonehaven where trial deployments were conducted. The cruise then journeyed to the JONSIS long term monitoring section off the north coast of Orkney before travelling to the Fair Isle- Munken, Cape Wrath-Munken and Nolso-Flugga long term monitoring sections all located between the Faroe Islands and the north coast of Scotland. Additional casts were taken at ADCP moorings around the Fair Isle - Munken section.

A SBE35 carousel was used to collect the water samples.

The CTD data were processed using the Sea-Bird SeaSoft routines as recommended in the SeaSoft manual for model type Sea-Bird 911plus V2 SEACAT. Pressure data were binned to 1 dbar using SeaSoft. The primary temperature and conductivity channels were adjusted to produce 'edit' channels which Marine Scotland regards as the definitive version of the data. The adjustments consisted of a de-spiking process using Marine Scotland in-house visualisation software and, as necessary, application of a low pass filter as described in Sy (1985). The time was recorded in UTC.

A total of 137 water samples were taken by Marine Scotland using a SBE35 carousel to provide a calibration equation for conductivity as follows:

The calibration was not applied to the data by the Originator.

A total of 145 water samples were taken by Marine Scotland using a SBE35 carousel to provide a calibration equation for fluorescence as follows:

The calibration was not applied to the data by the Originator.

The data arrived at BODC in 3 concatenated ASCII format files representing cruises FRV Scotia 0512S (97 casts) , 1312S (125 casts) and 1712S (119 casts). The concatenated files were sub-divided into individual files for each cast, using BODC in house Matlab software. These were reformatted to the internal BODC format using transfer function 340. The following table shows how the variables within the files were mapped to appropriate BODC parameter codes:

Benson, B.B., Krause Jr, D., 1984. The concentration and isotopic fractionation of oxygen dissolved in freshwater and seawater in equilibrium with the atmosphere. Limnology and Oceanography 29(3), 620-632 pp.

Marine Scotland first sampled the transect in May 2009. Marine Scotland hope to sample this line twice a year (April-May and September-October) and if possible in December.

The stations along this line will be mainly used for CTD deployments although salinity samples will be taken along the line for calibration purposes. Some nutrient samples have been taken by Marine Scotland but it is not anticipated that nutrient sampling will become a regular occurrence.

The Faroese are also sampling this line. 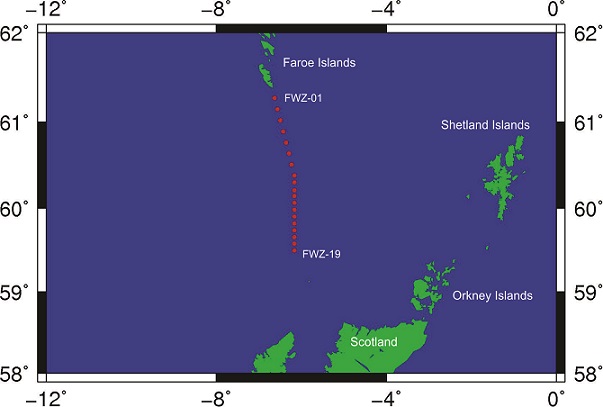 Listed below are details of the standard hydrographic stations that form the Faroe-Cape Wrath line.

This line is not shown on the map but may be sampled occasionally.