The oxygen data from this cruise are noisy and have not been calibrated against sample data. They should be used with great caution.

The SBE 13 was designed as an auxiliary sensor for Sea Bird SBE 9plus, but can fitted in custom instrumentation applications. When used with the SBE 9 Underwater Unit, a flow-through plenum improves the data quality, as the pumping water over the sensor membrane reduces the errors caused by oxygen depletion during the periods of slow or intermittent flushing and also reduces exposure to biofouling.

The output voltage is proportional to membrane current (oxygen current) and to the sensor element's membrane temperature (oxygen temperature), which is used for internal temperature compensation.

The SBE 13 instrument has been out of production since 2001 and has been superseded by the SBE 43.

Documentation for the CTD data collected on RRS Challenger 114 (August 1994) by the Dunstaffnage Marine Laboratory, Oban, Argyll, Scotland, UK, under the direction of J. Graham.

The instrument used was a Seabird 9/11 CTD, and the data were processed using the Seabird software. The manufacturer's calibrations were used. Data have been averaged to 1 decibar values.

Shelf edge station L7 is one of 11 fixed STD/CTD stations striding the shelf edge to the south east of the Anton Dohrn Seamount. The station was established by scientists at Dunstaffnage Marine Laboratory (DML).

Shelf Edge Line L is a north east - south west orientated survey section striding the shelf edge to the west of Scotland. The section comprises fixed STD/CTD stations, which were surveyed by Dunstaffnage Marine Laboratory (DML), predominantly during 1993 and 1994. 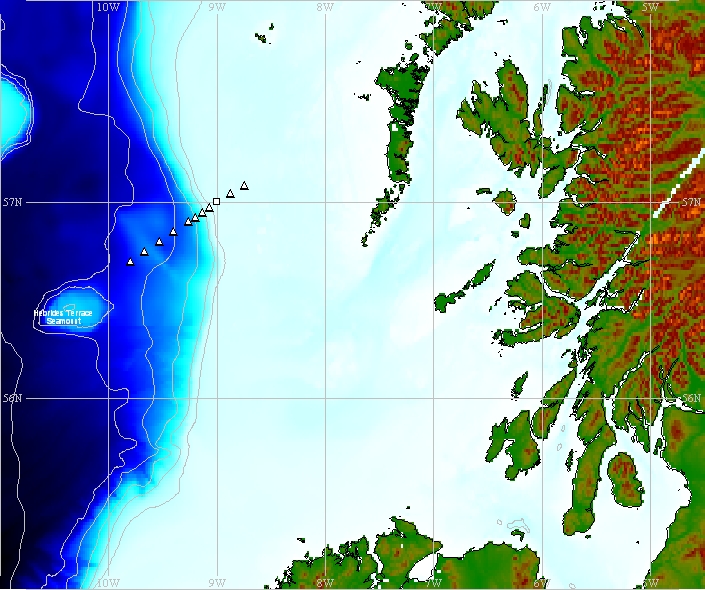