The CTD profiles were taken with a Neil Brown Systems MkIIIc CTD mounted beneath a bottle rosette. The CTD was fitted with a pressure sensor, conductivity cell, platinum resistance thermometer, a dissolved oxygen sensor, a Chelsea Instruments fluorometer, a Sea Tech 100cm path transmissometer, a Simrad 200kHz altimeter and an IOSDL 10kHz pinger.

Lowering rates for the CTD package were generally in the range 0.5-1.0ms-1 but could be up to 1.5ms-1. CTD data were logged at 25 frames per second. The CTD deck unit passes raw data to a dedicated Level A microcomputer where 1 second averages are assembled. During this process the Level A calculates the rate of change of temperature and a median sorting routine detects and removes pressure spikes. These data are sent to the Level B for archival. The data are then passed to a Level C workstation for conversion to Pstar format and calibration.

A total of 106 stations were occupied (12671 - 12776). At the first station (12671) all 24 bottles were fired at 2900m and a full suite of analyses performed to test the bottles. Two stations were aborted, 12672 due to a wire problem, and 12724 due to a strong current. The fluorometer failed early on due to the DC voltage converter breaking down. The spare then failed after a few casts due to an over voltage being applied.

The data originators have informed BODC that the data submitted to us are not fully worked up, and suffer from a CTD salinity hysteresis. This is apparently a problem associated with the WOCE upgraded CTD's (Deep03 and Deep04). The data originators calibrated the CTD upcast (instead of the down). They say they would use a larger time constant especially as they smooth and reduce the data for WOCE. The scale of the problem makes it unimportant for the work they are currently doing and hence they have not done anything about it yet. The salts, temperatures, oxygens and nutrients in the bottle data are thought to be satisfactory. The data originators are also a bit suspicious of the salinity calibration on stations 12743 and 12744. A different standard seawater was used and the deep theta/S shows a significant offset. They have no conclusion or correction to add yet. Neither the fluorometer nor the transmissometer data are fully worked up.

The data were converted into the BODC internal format (PXF) to allow the use of in-house software tools, notably the graphics editor. Spikes in the data were manually flagged 'suspect' by modification of the associated quality control flag. In this way none of the original data values were edited or deleted during quality control.

Station 12687 has no data between 2725-2841db for all parameters, similarly for station 12771 between 5449-5453db. The temperature, salinity and oxygen data from cruise DI213 required little flagging and just a few points were set suspect. The fluorometer data were very bad with only station 12671 exhibiting good data. The transmissometer data were also bad with disturbances in many of the profiles, primarily between 800 and 1500db.

Once screened, the CTD data were loaded into a database under the Oracle relational database management system. The start time stored in the database is the CTD deployment time, and the end time is the time the CTD was removed from the water. Actually these times are more precisely the start and end of data logging. The start time for station 12771 is given as 03:53 in the cruise report. This was changed to the start time in the data file, which was 04:15. Latitude and longitude are the mean positions between the start and end times calculated from the master navigation in the binary merged file.

All the fluorometer data were set null in the database except for station 12671. Potential attenuance was converted to attenuance from within Oracle as follows: 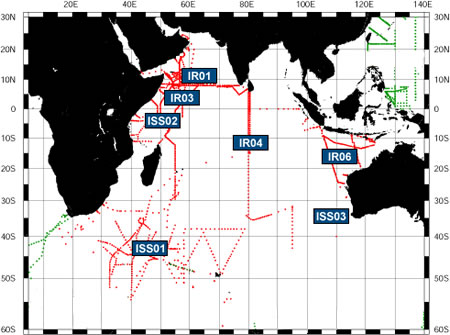