The EA600 is a single beam echosounder with full ocean depth capability designed for bathymetric surveys. It measures water depth by monitoring the travel time of an acoustic signal that is transmitted from the ship, reflected off the seabed and received back at the ship.

The main components of the system are hull-mounted transducers linked to general purpose transceivers (GPTs). Up to four GPTs, each controlling one or more transducers, may be operated simultaneously. The GPT generates a signal, which is transmitted into the water column as an acoustic pulse by the transducer array, and the returning echo is recorded by the GPT. GPTs are in turn linked to a combined display and processor, where adjustments (such as sound-speed corrections) may be applied to the data. Available frequencies span from 12 to 710 kHz, and each GPT may operate at a separate frequency. A variety of transducers is available for water depths up to 11,000 m.

The EA600 stores all data internally but has a USB port which allows the possibility of connecting a CD-ROM/DVD drive to read and write the data. All echo data can be stored as files: bitmap, sample, depth or sidescan data.

In deeper waters, the EA600 supports a multipulse function, allowing for a higher pinger rate. While on passive mode, the pinger is normally attached to a device, with the purpose of tracking and displaying its current depth.

A family of instruments that contain a controlled gyroscope which seeks and aligns itself with the meridian and points to true north. They use the properties of the gyroscope in combination with the rotation of the earth and the effect of gravity. The effects of varying speed and latitude are compensated for by the use of manually operated controls. Models MOD I, MOD O, MOD D, MOD D/E are all with an analog output Step or/and Syncro. MOD VT is the latest model with NMEA Data output as well.

Further information for MOD D/E can be found in the user manual.

Navigation data were obtained through different instruments, but as the Seatex provides the position information for the multibeam system, it is considered as a primary source of data so, unlike the other positioning streams, this stream was transferred. Raw data from the different navigation streams is available upon request.

The following table presents the instruments that collected data during the cruise:

Navigation data were acquired through the different instruments and stored in individual files, each corresponding to one instrument. The data was logged every second to the SCS system and stored in comma separated format in .ACO files, as processed files in tab delimited with a 30 second interval in .LAB and the header information in .TPL files. The gyrocompass did not record data during the cruise period, so this parameter was originated by the GSP system.

Parameter codes defined in BODC's parameter dictionary were assigned to originator's variables. No unit conversion was applied as the originator's units are equivalent to the units defined on the BODC vocabulary. Data were loaded into BODC's database using established data banking procedures.

A check was run on the position data and no gaps were observed in the data. Several speed fails were identified and data for these instances were interpolated through established procedures.

Ship's eastward and northward velocities were calculated from the main latitude and longitude channels. Data exhibit good quality, with no gaps or spikes identified.

No flags were applied to ship's heading.

Distance run was calculated from the main latitude and longitude channels, starting from the beginning of the cruise. 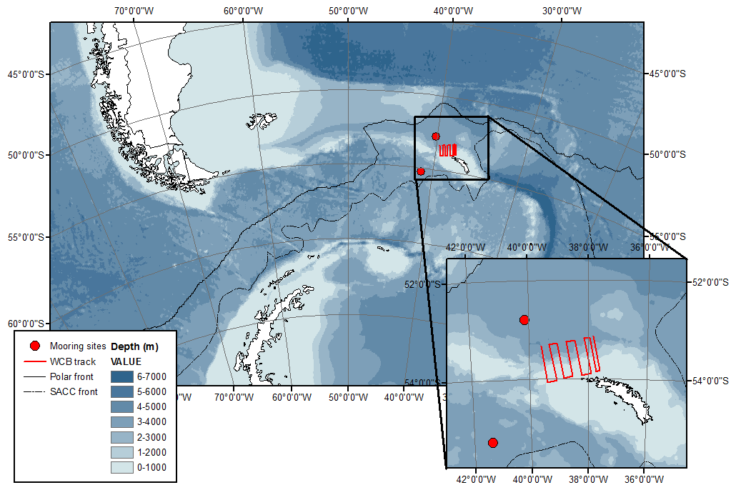