Manufacturer's specifications: recording unit height 49.5cm (RCM8 52.0cm), diameter 12.8cm, vane size 48.5x50.0cm. Meter is designed for depths down to 2000m (RCM8 6000m). It incorporates a spindle which is shackled to the mooring line. The meter is attached to the spindle through a gimbal mounting which permits a maximum 27° deviation of the spindle from the vertical, the meter still remaining horizontal.

A built-in clock triggers the instrument at preset intervals and up to six channels are sampled in sequence. Channel 1 is a fixed reference reading for control purposes and data identification. Channels 2, 3 and 4 represent measurement of temperature, conductivity and pressure. Channels 5 and 6 represent the VECTOR AVERAGED current speed and direction since the previous triggering of the instrument. The number of rotor revolutions and the direction is sampled every 12 seconds and broken into North and East components. Successive components are added and recorded as speed and direction. For recording intervals longer than 10 minutes, speed and direction are sampled 1/50th of recording interval.

It has become common practice in some laboratories to deploy these meters as temperature and conductivity loggers without current measuring capabilities.

The following link will provide the manufacturer specifications:

The Land Ocean Interaction Study (LOIS) was a Community Research Project of the Natural Environment Research Council (NERC). The broad aim of LOIS was to gain an understanding of, and an ability to predict, the nature of environmental change in the coastal zone around the UK through an integrated study from the river catchments through to the shelf break.

LOIS consisted of the following components:

SES was a component of the NERC Land Ocean Interaction Study (LOIS) Community Research Programme that made intensive measurements from the shelf break in the region known as the Hebridean Slope from March 1995 to September 1996.

SES was devoted to the study of interactions between the shelf seas and the open ocean. The specific objectives of the project were:

The SES fieldwork was focussed on a box enclosing two sections across the shelf break at 56.4-56.5 °N and 56.6-56.7 °N. Moored instrument arrays were maintained throughout the experiment at stations with water depths ranging from 140 m to 1500 m, although there were heavy losses due to the intensive fishing activity in the area. The moorings included meteorological buoys, current meters, transmissometers, fluorometers, nutrient analysers (but these never returned any usable data), thermistor chains, colour sensors and sediment traps.

The moorings were serviced by research cruises at approximately three-monthly intervals. In addition to the mooring work this cruises undertook intensive CTD, water bottle and benthic surveys with cruise durations of up to 6 weeks (3 legs of approximately 2 weeks each).

Moored instrument activities associated with SES comprised current measurements in the North Channel in 1993 and the Tiree Passage from 1995-1996. These provided boundary conditions for SES modelling activities.

Additional data were provided through cruises undertaken by the Defence Evaluation and Research Agency (DERA) in a co-operative programme known as SESAME.

The instruments formed a U-shaped mooring anchored by two 450kg weights, connected by a 100 metre ground wire. A spar marker buoy was attached to one of the weights, with a recovery line. The instruments, attached to the second weight, were held erect by a sub-surface buoy.

Instruments deployed on the rig

Both instruments were fitted with temperature and salinity sensors. 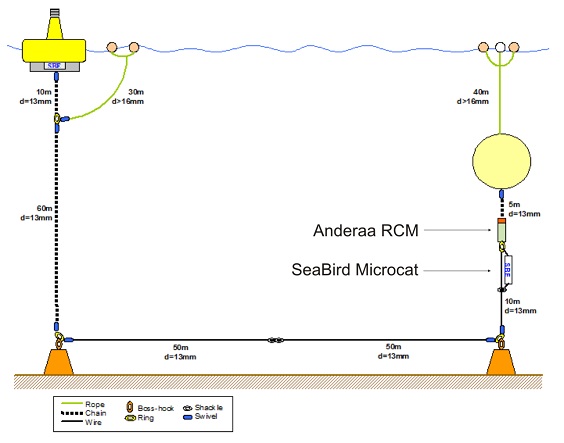