A total of 66 CTD casts were made with a SAMS Sea-Bird 911 plus CTD system. Extra weight was added to the frame to prevent the CTD slipping off the roller due to the sea swell. The rossette was fitted with 22 * 10L Niskin bottles. This CTD system was used between the 24th July and 6th August 2003.

The CTD was fitted with the following scientific sensors:

The salinity samples from the CTD were analysed during the cruise in a constant temperature laboratory using a bench top salinometer.

The ECO-FL can operate continuously or periodically and has two different types of connectors to output the data (analogue and RS-232 serial output). The potted optics block results in long term stability of the instrument and the optional anti-biofouling technology delivers truly long term field measurements.

In addition to the standard model, five variants are available, and the differences between these and the basic ECO-FL are listed below:

A total of 82 CTD casts were performed during the cruise. After cast 16, the Kiel-owned CTD frame was replaced with a smaller package from SAMS and used for the remainder of the cruise - a step taken to improve the safety of deployment and recovery. A SAMS fluorometer, which had been used since the start of the cruise, was fitted to this replacement CTD package. Rosette bottles on the CTD were used to collect water samples on the upcasts. These were used to calibrate the CTD conductivity sensor and also to obtain samples for analysis of chlorophyll a, POC, PON and nutrients.

Following the completion of each CTD cast the data were saved to the deck unit PC and transferred over the network to a Unix data disk. SBE Seasave Win32 V 5.35 software was used to perform all processing steps.

Raw data files were converted to engineering units and binary .CNV files using the DATCNV program. Sea-Bird bottle data files (.BTL), with information on pressure and other readings logged at the time of bottle firing, were also generated during the data conversion process. The WILDEDIT program was run to remove any large pressure spikes and then the SeaSoft program ALIGNCTD was run to advance the oxygen measurements by 3 seconds ensuring the calculations of dissolved oxygen concentration are made using measurements from the same parcel of water. CELLTM was run, according to Sea-Bird's recommendations, to remove conductivity cell thermal mass effects from the measured conductivity and FILTER was run on the pressure channel using a low-pass filter value of 0.2 to smooth the rapidly changing data. Finally, salinity, density and depth were calculated using the DERIVE program and TRANSLATE wrote the data to an ASCII output .CNV file. Despiking of the pressure, oxygen, temperature and salinity data was carried out by visualising the data in MATLAB. If a spike occurs in pressure, temperature or salinity the whole corresponding scan is deleted. If the spike occurs in the other channels, the value is set to NaN and all remaining channels are left unedited. Following despiking of the data in MATLAB the module BINAVERAGE averaged the 24 Hz data into 2db-bins, using the downcast data only.

More information on the processing steps can be found in the SAMS Sea-Bird processing document.

The CTD data obtained with the Kiel CTD frame were supplied to BODC in the form of 82 ASCII, WHP (WOCE Hydrographic Program) standard files bin-averaged to 2 dbar.

24 Hz ASCII versions of these data are also available from BODC, upon request. These files are held in their original format and, although containing additional parameters, have undergone less quality control and remain uncalibrated.

The submitted WHP standard casts were transferred to BODC's internal QXF format using Matlab. During transfer the originator's variables are mapped to unique BODC parameter codes. The mapping can be seen below.

The Northern Seas describes an area extending from the Irish and northern North Sea across the Norwegian Sea up to the marginal Arctic pack-ice zone, including territorial waters of the UK, Norway, Iceland, Denmark and Russia. These waters are an important marine environment playing a significant part in regulating world climate due to the area's role in thermocline circulation in addition to acting as a sink for man-made pollutants carried north by ocean currents. These environments are experiencing increasing pressures from both natural and human impacts and consequently the Northern Seas Programme was developed to help advance the understanding of how marine systems in Northern Seas respond to environmental and anthropogenic change.

The central aim of the programme was to 'improve understanding of how the sensitivity of marine ecosystems to environmental perturbation, both natural and anthropogenic, varies along a latitudinal gradient'.

This aim was addressed through the following integrated themes:

Theme B: Ocean Margins: the interface between the coastal zone and oceanic realm

The Northern Seas Programme was active between 2001 and 2007. The fieldwork programme to address these objectives was conducted by staff from the Scottish Association for Marine Science (SAMS).

Theme B: Ocean Margins: the interface between the coastal zone and oceanic realm

The interface between coastal and oceanic realms at the ocean margins has been addressed through the following sub-themes:

Sub Theme B3: The ecology of deep-water fisheries of the Northern Rockall Trough

The Wyville Thomson Ridge marks the boundary between the Rockall Trough and the Faroe-Shetland Channel. The Ridge is an important area for the study of deep ocean circulation and has been the focus of many studies (particularly CTD surveys), by various institutions, since 1975.

Station PA2 is one of several fixed CTD stations established by scientists at Dunstaffnage Marine Laboratory (DML), which together form Line PA. Station PA2 is situated on the Wyville Thomson Ridge and was first occupied on cruise PO300_2 in 2003 and again, in 2004, during cruise D321B.

Line PA, also referred to as the Poseidon Section, is a hydrographic transect comprising eight CTD stations running in a north east - south west direction and linking the Rockall Trough with the Faroe-Shetland Channel, via the Wyville Thomson Ridge. Line PA was occupied on cruise PO300_2 in 2003 and again in 2004 as part of cruise D321B. 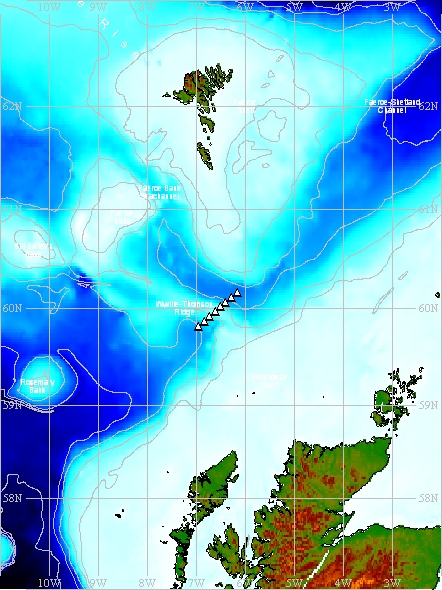 The black triangles indicate the nominal positions of individual Line PA stations which make up the repeat section. Measurements made along Line PA lie within a box bounded by co-ordinates 59° 49.2' N, 6° 57.0' W at the south west corner and 60° 10.0' N, 6° 9.9' W at the north east corner.