The Niskin bottle is a device used by oceanographers to collect subsurface seawater samples. It is a plastic bottle with caps and rubber seals at each end and is deployed with the caps held open, allowing free-flushing of the bottle as it moves through the water column.

The standard version of the bottle includes a plastic-coated metal spring or elastic cord running through the interior of the bottle that joins the two caps, and the caps are held open against the spring by plastic lanyards. When the bottle reaches the desired depth the lanyards are released by a pressure-actuated switch, command signal or messenger weight and the caps are forced shut and sealed, trapping the seawater sample.

The Lever Action Niskin Bottle differs from the standard version, in that the caps are held open during deployment by externally mounted stainless steel springs rather than an internal spring or cord. Lever Action Niskins are recommended for applications where a completely clear sample chamber is critical or for use in deep cold water.

A modified version of the standard Niskin bottle has been developed for clean sampling. This is teflon-coated and uses a latex cord to close the caps rather than a metal spring. The clean version of the Levered Action Niskin bottle is also teflon-coated and uses epoxy covered springs in place of the stainless steel springs. These bottles are specifically designed to minimise metal contamination when sampling trace metals.

Samples were collected from 13 CTD casts at up to eight depth levels. The water sample was transferred from the CTD to 60 ml HDPE Nalgene bottles (acid washed and cleaned) using Silicone tubing, with the sample bottle being washed three times before the final sample was taken. This sample was then immediately taken to the laboratory and analysed as soon as possible after the sample was collected. Gloves and other clean handling protocols were adopted following the GO-SHIP protocols. When immediate analysis was not possible samples were stored in the dark, in a fridge, and brought back to room temperature prior to analysis.

Mantoura R.F.C and Woodward E.M.S, 1983.Optimization of the indophenol blue method for the automated determination of ammonia in estuarine waters. Estuarine Coastal and Shelf Science, 17, 219-24.

The data arrived at BODC in one Excel (.xlsx) file containing discrete samples collected from the DY008 CTD deployments. Data received were loaded into the BODC database using established BODC data banking procedures. Data were loaded into BODC's database without any changes. Originator's variables were mapped to appropriate BODC parameter codes as follows:

Shelf Sea Biogeochemistry (SSB) is a £10.5 million, six-year (2011-2017) research programme, jointly funded by the Natural Environment Research Council (NERC) and the Department for Environment, Food and Rural Affairs (DEFRA). The aim of the research is to reduce the uncertainty in our understanding of nutrient and carbon cycling within the shelf seas, and of their role in global biogeochemical cycles. SSB will also provide effective policy advice and make a significant contribution to the Living with Environmental Change programme.

The Shelf Sea Biogeochemistry research programme directly relates to the delivery of the NERC Earth system science theme and aims to provide evidence that supports a number of marine policy areas and statutory requirements, such as the Marine Strategy Framework Directive and Marine and Climate Acts.

The shelf seas are highly productive compared to the open ocean, a productivity that underpins more than 90 per cent of global fisheries. Their importance to society extends beyond food production to include issues of biodiversity, carbon cycling and storage, waste disposal, nutrient cycling, recreation and renewable energy resources.

The shelf seas have been estimated to be the most valuable biome on Earth, but they are under considerable stress, as a result of anthropogenic nutrient loading, overfishing, habitat disturbance, climate change and other impacts.

However, even within the relatively well-studied European shelf seas, fundamental biogeochemical processes are poorly understood. For example: the role of shelf seas in carbon storage; in the global cycles of key nutrients (nitrogen, phosphorus, silicon and iron); and in determining primary and secondary production, and thereby underpinning the future delivery of many other ecosystem services.

Improved knowledge of such factors is not only required by marine policymakers; it also has the potential to increase the quality and cost-effectiveness of management decisions at the local, national and international levels under conditions of climate change.

The Shelf Sea Biogeochemistry research programme will take a holistic approach to the cycling of nutrients and carbon and the controls on primary and secondary production in UK and European shelf seas, to increase understanding of these processes and their role in wider biogeochemical cycles. It will thereby significantly improve predictive marine biogeochemical and ecosystem models over a range of scales.

The scope of the programme includes exchanges with the open ocean (transport on and off the shelf to a depth of around 500m), together with cycling, storage and release processes on the shelf slope, and air-sea exchange of greenhouse gases (carbon dioxide and nitrous oxide).

15 different organisations are directly involved in research for SSB. These institutions are

In addition, there are third party institutions carrying out sampling work for SSB, but who are not involved in the programme itself. These are:

Overall, five Work Packages have been funded by the SSB programme. These are described in brief below:

The campaign consists of the core cruises in the table below, to the marine shelf (and shelf-edge) of the Celtic Sea on board the NERC research vessels RRS Discovery and RRS James Cook. These cruises will focus on the physics and biogeochemistry of the benthic and pelagic zones of the water column, primarily around four main sampling sites in this area.

Core cruises will be supplemented by partner cruises led by Cefas, MI, MSS, Bangor University and AFBI, spanning the shelf seas and shelf-edges around United Kingdom and Republic of Ireland.

This station is positioned close to the edge of the north-west European shelf edge (see figure below). It was first visited by the RRS James Clark Ross (JR98) in 2003 and then by the RRS Charles Darwin (CD173) in 2005. This station was then re-visited in 2014 during the RRS Discovery cruise DY018, as part of work package I of the Shelf Seas Biogeochemistry project. The station has a mean water depth 201 m at the following co-ordinates:

The position of this station relative to the other sites visited during JR98, CD173 and DY018 can be seen from the figure below. 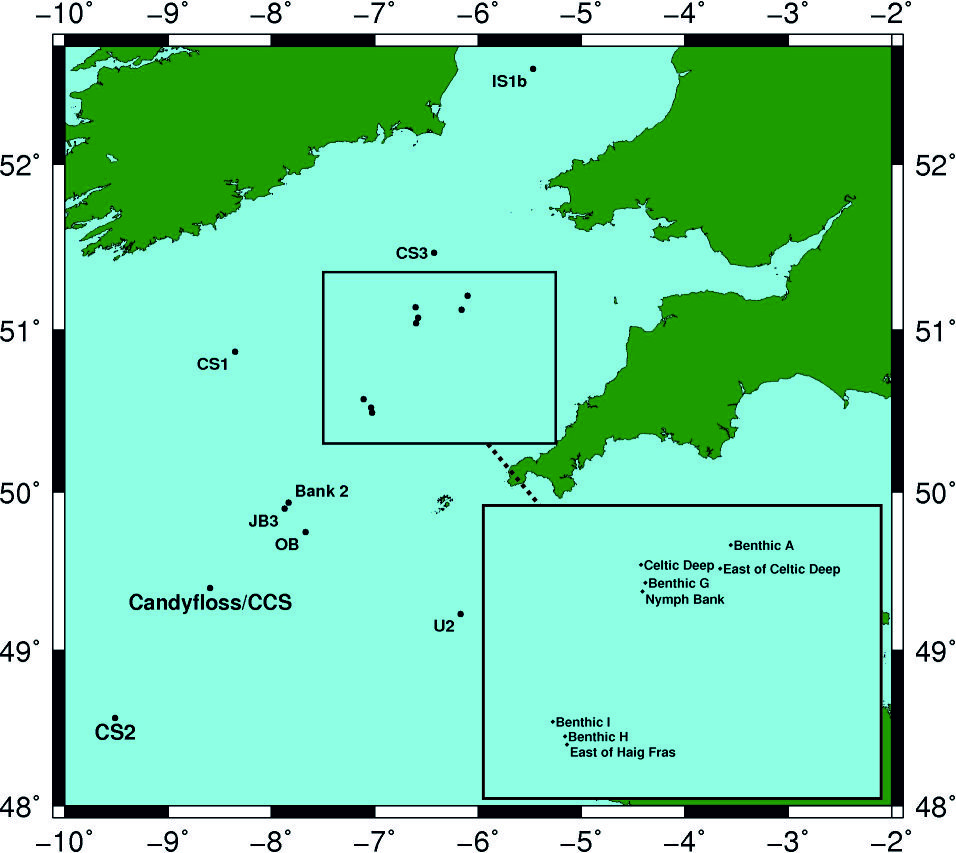 The following table describes which sites were visited during which cruises

The deployment and sampling history, to date, for this station is summarised below: