The PSA 916 is a submersible altimeter that uses the travel time of an acoustic signal to determine the distance of the instrument from a target surface. It provides the user with high resolution altitude or range data while simultaneously outputting data through a digital serial port. A wide beam angle provides for reliable and accurate range measurements under the most severe operational conditions. The instrument is electronically isolated to eliminate any potential signal interference with host instrument sensors. The PSA 916 is an upgrade of the PSA 900.

Further details can be found in the manufacturer's specification sheets for the PSA 916 and the PSA 916T.

The data were received in one netcdf file per station and contained data from primary and secondary sensors, with various filtered versions. Most of the uncalibrated filtered data (excluding fluor_filt) were not loaded as they had been superseded by calibrated data. The transmittance and optical backscatter channels were not loaded as these were problematic (see cruise report p.17). The originator derived channels were also not loaded, with potential temperature and sigma-theta re-derived by BODC. In addition, press_filt was not required as press_filt_bin_average was a more appropriate pressure variable to use. The remaining data channels were converted into the internal BODC format.

The reformatted data were visualised using the in-house EDSERPLO software. The data were screened and quality control flags were applied to data as necessary. The conductivity primary sensor 1 was found to have malfunctioned for three of the casts, 27, 38 and 39. This lead to pronounced salinity and density inversions of >0.5 in these profiles. The conductivity from the secondary sensor 2 appeared to be unaffected, whilst sensor 1 and sensor 2 data compared well for the other casts. Therefore, for casts 27, 38 and 39 only sensor 2 data (all variables) have been included and all BODC derived channels have been calculated using sensor 2 data only. The remaining 92 casts have data from the primary sensors only and all derived channels have been calculated from these.

The following table shows how the variables within the netCDF files were mapped to appropriate BODC parameter codes:

Benson, B.B. and Krause, D., 1984. The concentration and isotopic fractionation of oxygen dissolved in freshwater and seawater in equilibrium with the atmosphere. Limnology and oceanography, No.29(3), 620-632pp.

UNESCO, 1978. Eighth report of the joint panel on oceanographic tables and standards. UNESCO Technical Papers in Marine Science, No.28, 35pp.

Ninety six CTD profiles were performed during the cruise, 95 were received (cast 5 abandoned as pumped blocked, cast 6 at same location). CTD casts are labelled from 1 to 98. Cast 1 is a test cast, and casts 69, 76 and 81 were cancelled due to time constraints. Data were measured at 24 Hz and averaged to 2 dbar.

Further details of sampling problems and sensor failures can be found in the cruise report.

Conductivity was calibrated rather than salinity using bottle samples from the CTD rosette compared to CTD conductivity. Overall sensor performance was assessed to be good. Bottle sample salinity and CTD salinity were also compared to demonstrate behaviour of sensors. It was concluded that CTD salinity 1 did not have an offset, although temperature 1 did, and so conductivity 1 was calibrated. Salinity 2 had a slight pressure-dependent offset and was therefore calibrated.

The following method provided by Brian King is the standard National Oceanography Centre Southampton scientists' approach for calibrating conductivity;
1) Bottle salinity, as measured by the bench salinometer, is converted to 'potential conductivity' at the CTD bottle location using in situ temperature and pressure, and the CSIRO EOS-80 Seawater algorithms.
2) CTD conductivity is calibrated against this 'potential conductivity'.
3) CTD salinity is derived using the corrected conductivity data and the PSS-78 algorithm.

Oxygen data were calibrated against dissolved oxygen measurements taken from discrete bottles and determined using the Winkler method on board the ship. The CTD oxygen sensor behaviour was observed to have jumped between casts 23 and 26. The sensor was changed after cast 68. See cruise report for further calibration details. 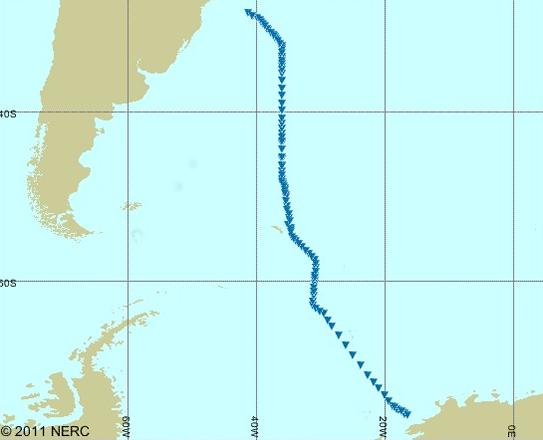